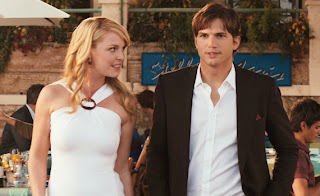 It's Father's Day and hubby and I decided we'd go bowling this afternoon. But alas. His knee is still bothering him and he can't bowl! No fun for him just watching ME bowl, so we went to the movies. Of course, nothing was playing that we wanted to see except "Robin Hood" (the Russell Crowe version). Unfortunately, there was no matinee for "Robin Hood" and we never pay full price at the cinema. So it was either "Karate Kid" or "Killers." I wanted to see "Karate Kid" but hubby didn't think it would be that great. Nothing compares with the Ralph Macchio version. Absolutely NOTHING!!!

So we went to see "Killers." I'd have to say it's one of the worst films I've seen in a long time. Yes, Ashton Kutcher was adorable. In fact, he was the only thing that made it possible to sit through (especially the scene where he meets Katherine Heigl for the first time...in the elevator... shirtless...in Nice, France... "Bon jour"...sigh!)

The best way I can describe the movie is "disconnected." Nothing made sense. The characters' motivations were inconsistent, to say the least. Mom was a cliche drunk, the neighborhood assassins were ludicrous, the car chases and explosions were pointless.

To give credit where credit is due, Tom Selleck was superb. His character had a little bit more depth than then others, and he was funny as the overprotective father/spy.

If you're going to watch this movie, drink a lot of wine coolers first.
Posted by Luana Krause at 5:13 PM

Thanks for the warning!

You're welcome. Another thing I just thought of...the title doesn't fit at all for a romantic/comedy/action movie. I would have called it "Spy vs. Spy" or "A Normal Life."

Grandma,This is yourgranddaughter nessa.ANDDD!!!!I am gunnna be a critic for a moment. I looooovvveeedddd that movie!!! It was sooooo funnnyyy!!! I dont get how u hate it soo much. Oh well haha. just wanted to say i liked it.

Hi, Nessa! That's okay. You can like the movie. It won't hurt my feelings. LOL. I didn't really HATE it...just wasn't impressed. I've seen much worse. And much better.