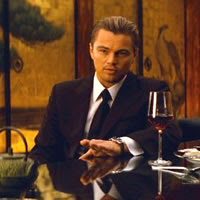 So why is it that all of a sudden I'm a huge fan of Leonardo DiCaprio? Yes, I've always liked his movies but as an actor he was nothing to write home about. Until now.

I think it has a lot to do with his maturity and the choices he's made in selecting films. He has the luxury of being selective. He seems to have good instincts in choosing excellent roles.