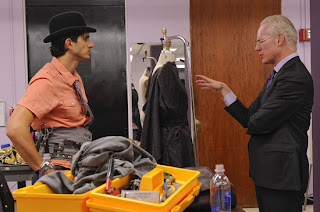 I missed you terribly! I'm so happy to see you once again on the new season of Project Runway. How I wish I were one of the designers on the show. Unfortunately, I couldn't sew myself out of a paper bag so it's probably for the best.

Nevertheless, I'm concerned about Casanova and the horrible situation with his $1,070 Dolce & Gabbana pants. What was he thinking? Maybe he had in mind to make "pants out of pants" like Ivy. How was he to know that his plan would backfire? Oh, well. Live and learn.

And as for the look he showed on the runway. OMG! Michael Kors was right. She looked like a pole dancer in Dubai.

Okay, let's talk about Ivy. I concur with the judges that those pants were the absolute worst! But I can't place the blame completely on Ivy. Those pants belonged to Peach, who appears to be a fashion designer that buys her clothes at Wal-Mart.

As for some of the others, Jason is channeling Laurel & Hardy, Sarah looks like an 80s drag queen, and Valerie should re-think the bangs.

My favorites are Kristin, Gretchen, Mondo, A. J., Michael C. and Nicholas. BTW, how on earth did Nicholas end up with the most beautiful model of the bunch? That girl is STUNNING!

Tim, I must say that you are the best thing about Project Runway. I love the way you encourage the designers and tell them to "make it work." Your insightful comments keep them on the right track and they would be smart to heed your advice.

Here's to a great season! I'm looking forward to see what new challenges the designers will face.

P.S.
So what do you think of Heidi's new hair style?
Posted by Luana Krause at 7:36 PM

I have just installed iStripper, so I can have the sexiest virtual strippers on my taskbar.