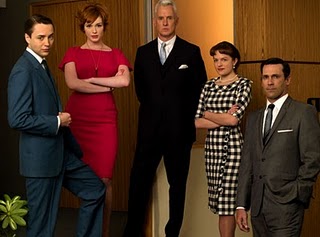 I'm a fan of Mad Men, AMC's Emmy-winning series about the fictional ad agency Sterling Cooper Draper Pryce. It's one of the best shows about the advertising industry in a quite a while. I'm digging the mod 60s vibe of the sets and fashion, as well as the historical notes about real advertising interspersed during the "commercial" breaks. What's not to like?

Tragically, the season finale is next Sunday! In yesterday's show, the agency is "going under" due to loss of the Lucky Strike account. Dan Draper makes a bold move by submitting a full-page letter in the New York Times stating the agency has decided to take the moral ground and not advertise for tobacco companies. The partners had no clue and were furious with Dan for "euthanizing" the agency.

Dan's young daughter, Sally, is having emotional problems after her parents' divorce and is seeing a shrink.

The partners must contribute $100,000 each to keep the agency afloat. Pete Campbell (account executive) will only need to contribute $50,000. He has an argument with his pregnant wife and she compares his job to "a state room on the Titanic." Dan, in an act of generosity and to assuage his guilt, pays for Pete's contribution.

Dan runs into a friend named Midge, whom he discovers is an artist and a heroin addict. He buys one of her paintings, which inspired him to write the full-page letter to the New York Times called, "Why I'm Quitting Tobacco," the ad that caused all the brouhaha.

Due to cutbacks, people are getting fired right and left, but Peggy's job is safe.

Want To Increase Your ClickBank Banner Traffic And Commissions?