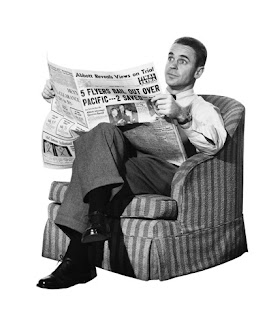 I laughed my socks off when I read this "real life" blurb in our newspaper today:

STORY: A man who acknowledged stealing thousands of free copies of a Colorado resort town's two daily newspapers because his friend was named in police blotters has made a public apology.

The Aspen Daily News and The Aspen Times both printed an apology letter Friday from 23-year-old Mitchell Reed of Carbondale, who agreed to write the apology to avoid criminal theft charges.

Reed stole thousands of papers on November 5 because one of his friends was in that day's police blotter in both publications for a drug arrest. A maintenance worker told police that Reed dumped the papers in trash bins behind an area grocery store, and Reed confessed to the theft.

ME: This is the craziest thing I've ever heard. I mean, who does this? It's something Lucy Ricardo would do. I like starting my day with a laugh but who would have thought it would be in a news report?
Posted by Luana Krause at 8:40 AM