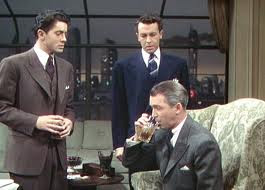 In Alfred Hitchcock's Rope (1948),  a couple of social elitists commit the perfect crime. The murder weapon? A rope.

Brandon and Phillip are intellectual snobs who look down their noses at everyone whom they deem to be inferior. In their thinking, killing a worthless person is the right thing to do. They want to prove to themselves that they can commit the perfect murder. The movie opens with Brandon and Phillip strangling their victim, David, with a rope.

After the murder, they decide to play a little game and raise the stakes by hiding the body and the rope in an old chest in the living room while hosting a dinner party that evening. The guests, which include David's father and girlfriend, haven't got a clue.

The only one who suspects something is amiss is Rupert (James Stewart), their former college professor who inspired their warped philosophy about mankind.

Rope was based on a play by Patrick Hamilton and the entire film takes place in one set (the living room). Hitchcock took it to another level by making the movie appear as if it were filmed in one continuous take. Pretty tricky considering the technical limitations of the period.

This is one of the most philosophical of Hitchcock's films. It raises questions about social class, prejudice, the meaning of life and purpose of man.

Must admit this one passed me by - sounds intriguing, thanks for the pointer.

I have watched a lot of Hitchcock movies in my time, but haven't ever come across Rope. It sounds like this book I read called "The Secret History." I'm going to have to look into it now; I just love him!
Ava

Hi, Dorothy: I never would have heard of it either if it wasn't in the Hitchcock DVD collection my son bought me for Christmas a few years ago. It's one of my favorites.

Ava: This movie is amazing. I've watched it several times; it's one of those movie where you discover new things every time you see it.

Wow - GREAT movie to highlight! Hitchcock was so cool, experimenting with different methods to challenge himself as a filmmaker - could I make a film that juggles several characters in a small boat? - could I make a film in several 10 minute takes and blend them into what appears to be one continuous shot? The technical details of what was done to make this movie work so well are flabbergasting - the sky outside the apartment changes with the time passing, for example. And can you just imagine the absolute fear the crew must have had in the last three minutes of each take, knowing that a blown line or dropped prop would initiate a whole new ten minute go at it? One show I worked on did a five or six minute scene in one take - those takes seemed to last FOREVER. Another movie that uses the same "fake single take" idea is Running Time with Bruce Campbell (a guy gets out of prison, and pulls off the heist he's been planning with his pals, all in about 80 minutes). The movie is made in more pieces than Rope - but it's fun watching how they blend the various shots together into one long one. In a connected by slightly different vein there are also a few "real-time" movies, not single take - but movies that take place in the same amount of story time as the film runs - but a couple are pretty obscure, so let's get the titles out there for those so inclined: High Noon with Gary Cooper (though I DESPISE this movie - it is "real-time"); The Sadist with Arch Hall Jr (obscure oldie about a giggling psycho and his girlfriend taking three teachers hostage plays out in the same 90 minutes the movie runs); and Nick of Time with Johnny Depp (guy gets dragged into gubernatorial assassination plot which is going to occur in an hour and a half). I'm sure there are more - but all of these are definitely at least worth a look if someone is intrigued by this kind of movie.

Craig: I agree. Rope was brilliant. The window depicting the passage was genius, and thanks for bringing up the anxiety of the crew in last part of the long takes...I hadn't thought of that but I'm sure that's what they were thinking. LOL.

Nick of Time was excellent and the "real passage of time" idea worked with this movie. This is the kind of movie I like to watch over and over again. It takes a lot of planning (and brilliant execution...no pun intended)
to be able to pull it off. Makes me wonder what Hitchcock would have done with this idea...seems like it would be right up his alley. It creates incredible suspense when the clock is ticking. Literally.

I regret that I've never seen High Noon. It's one of the classics that has passed me by. Rather unfortunate as it's often referenced in my film studies.

Another interesting thing I discovered about Rope is that the murderers were homosexual partners. In the British play, this relationship was apparent. In England it was not such a big deal. Here in America, however, it was taboo. Thus the script had to be revised to remove any suggestion of homosexuality, as well as British jargon. Watch "T Making of Alfred Hitchcock's Rope" on YouTube and listen to Arthur Laurents's remarks about this. Laurents wrote the screenplay.