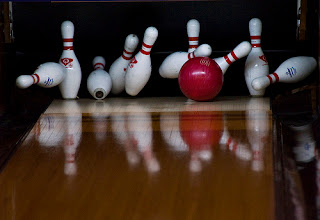 Hubby is a bowler. He loves the game and has been bowling for decades. He's very good at it, too.

Well, last year, he talked me into getting my own bowling ball and bowling shoes. I agreed and my game improved quite a bit. I used to search around for a house ball and could never find one that felt right. Now I have a custom made ball and it's great! Of course, hubby has been coaching me for years, showing me how to stand and where to aim for the strikes and spares.

But yesterday something happened that has never happened in the history of the universe: I won a game against hubby! I've NEVER beaten him in bowling. This was a first and it was so strange. Hubby was conflicted. Part of him was proud of me for doing so well, and the other part was upset for losing! He's very competitive and he had to deal with losing to his wife. C'est la vie!

He's a good sport, though. All through the game he was showing me what to do and how to throw the ball. He was teaching me a new technique involving throwing a curve ball. I won, but if he hadn't helped me, I don't think I would have.

I learned about the Killer Shot and I got three! Yay, me.

Good for you! It is hard for hubbies. I remember beating my husband at a video game when we were dating. I don't think he liked it!

That's terrific! Congratulations! I personally don't mind being beaten in a game by my wife - unless she cheats. ;)

Belle: Interesting. I guess hubby isn't the only one.

Craig: Thanks! I surprise myself sometimes. But like I said, hubby taught me everything I know about bowling.

Good for you and applying yourself and succeeding.

Anthony: Thanks! I seemed to have a natural gift for it...I've never been into sports (except for running and tennis).