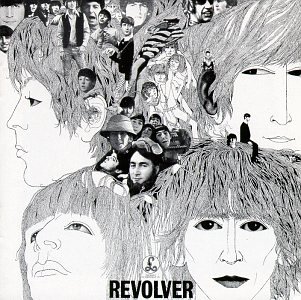 So I'm watching Mad Men last night and Megan Draper tells Don to listen to the newly released Beatles Album, "Revolver." As she walks out the door, she says "Play the last song." Don puts the record on and sits in a chair with his bourbon as the tune fills the room. The song continues to play as we cut to Peggy who is working late at the office and smoking a joint. Cut to Peter in his car watching the woman with whom he had an affair, getting in the car with her husband.

Revolver is one of my favorite Beatles albums. And it goes without saying that the artwork is amazing. This album was a turning point in their musical journey from pop/rock to psychedelic.

That is so awesome! Apparently they paid a LOT of money to use that - but music of the time is absolutely required for a period piece!

Craig: Mad Men features a song at the end of each episode that expresses the theme of the story. The was an episode where Don bought his daughter a ticket to see the Beatles at their first concert in NYC in 1964. The ending song was the Beatles "Do You Want to Know a Secret?" and the theme of the show was about secrets among the various characters.

Luana! It was nice seeing you on my blog again last week. How you been? Well, I hope. :)

Michelle: I've been great. Trying to stay in touch with all the cool blogs I've found in the challenge. Thanks for stopping by!

Great video. Mad Men rightly deserves all the awards. Everything is true to the era.

Susan: It's a great show. Creative and original...just like Sterling Cooper Draper Price.

That whole movie has an amazing soundtrack. I LOVE Revolver, and Hallelujah by Leonard Cohen...All so amazing.

Shauna: I agree. Mad Men has some pretty awesome tunes. I love the whole 60s vibe.