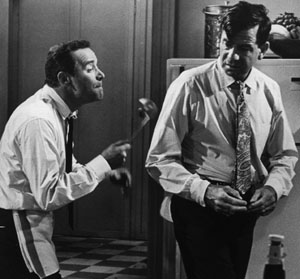 YIKES! I auditioned for The Odd Couple last night! Our community theater, the Cheyenne Little Theatre Players, is putting on the show and I couldn't be happier. I'm a huge fan of Neil Simon.

As a member of the programming committee, I help select our season line-up. It's right up my alley because I absolutely LOVE the theatre. I even have a Theatre Blog: All drama, all the time. I'm also a playwright and actor with the Sunnyside Players and write for their website.

Anyway, back to auditions. In addition to the leads, Oscar and Felix, there are six other cast members (four men and two women). The women are the Pigeon sisters, a couple of British divorcee's that live in Oscar's building. Gwendolyn is the older and Cecily the younger. At the auditions I read for both parts. They have one major scene in the second Act and then a small bit in the third Act.

The play is hilarious with smart writing by Simon. And although it's set in 1960s New York, the humor isn't lost on the modern audience. Even at the auditions, the audience was laughing when the actors on the stage read their lines.

I would love to get a part in a Neil Simon play, but if I don't I will be perfectly happy to be involved backstage. Auditions continue tonight and the cast list will be up on Wednesday!
Posted by Luana Krause at 5:38 AM