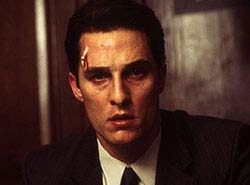 So I'm flipping through the channels one night and become mesmerized by this film called "Thirteen Conversations About One Thing."

The cinematography is what captured me right away...each frame is artfully composed; like a painting brought to life.

Here's a review on amazon that pretty much summed up my thoughts exactly:

A smartly written and wonderfully acted movie about happiness and fate. 13 Conversations About One Thing takes four characters (a lawyer who hits a housecleaner with his car, then flees the scene; the housecleaner herself; a science professor who leaves his wife; and an insurance claims adjuster who's deeply envious of a coworker who seems irrepressibly happy) and blends their stories into a delicate but potent mix. The characters cross paths at various points, but more often the events reverberate off each other in funny, surprising, or sorrowful ways. For all its cleverness, 13 Conversations never loses sight of the characters' humanity. The remarkable performances (from Matthew McConaughey, Clea DuVall, Amy Irving, John Turturro, and especially Alan Arkin) are riveting. On top of that, this movie, for all its quiet and talkative nature, is visually stunning, each shot a carefully composed portrait of a state of mind. --Bret Fetzer

ME: It's the kind of movie you want to see again and again so you can delight in the rich dialog, search for visual motifs and bask in the beauty of the images.
Posted by Luana Krause at 10:49 AM