Revenge of the Birds 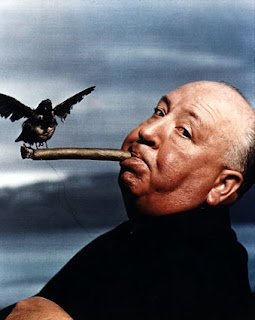 This is a movie review I wrote for Nights & Weekends:

One of the greatest filmmakers of all time, Alfred Hitchcock wasn’t called the Master of Suspense for nothing. In many of his movies, psychopaths, assassins, and homicidal maniacs play a major role. Yet, however dark and demented they may be, the one thing his villains share is their humanity.

Not so in The Birds. Hitchcock transforms our fine feathered friends into hated enemies, intent on taking their vengeance on mankind—or at least those who reside in California. But we can’t really blame the birds. The denizens of Bodega Bay pretty much deserve what they get.

Now, before you accuse me of being crude and heartless, let’s examine the facts. Here’s the pecking order:

Mitch (Rod Taylor): He’s too perfect. A successful lawyer who lives in San Francisco, he still takes time out of his busy schedule to visit his mother and sister every weekend in Bodega Bay. He has a charming sense of humor, he’s protective of his family, and he’s respected in the community. To make matters worse, he’s extremely good-looking. Enough said.

Melanie (Tippi Hedren): Rich, beautiful, and sassy, she’s certainly no birdbrain. However, her psychological hang-ups could fund Dr. Phil’s early retirement to the Bahamas. As a child she was abandoned by her mother, thus she craves attention by planning elaborate practical jokes. Her light-green suit makes her look like a parakeet, as does her pesky habit of cocking her head to one side. It’s obvious the birds have no sense of humor and are insulted by her parody. She becomes their first victim.

Lydia (Jessica Tandy): Mitch’s mother never recovered after her husband’s death, and she’s terrified of being alone. Perfectly understandable—except that her neurotic behavior turns her into the family martyr. She’s a mother hen who takes the empty nest syndrome to a whole other level. As if that’s not enough, she wears a skirt and pumps with matching handbag to drive a rusty old pickup to the neighbor’s farm. Call the fashion police!

Annie (Suzanne Pleshette): This is one hot chick. Unfortunately, that’s all she has going for her. She and Mitch were in love, but he broke it off when Mother disapproved. She left an exciting, adventurous life in San Francisco to pine away as an old-maid schoolteacher in Bodega Bay. Mitch is no longer interested in her romantically, but she stays in town because she can’t stand to be away from him. Her life is a cautionary tale told by feminists over martinis in Manhattan.

And let’s not forget the other citizens of Bodega Bay, who have inflamed the wrath of every bird on the West Coast. At the diner, we meet Mrs. Bundy, the ornithology expert, who tells us everything we wanted to know about birds but were afraid to ask. Her scientific explanations are punctuated by the town drunk’s prophesies of doom. A woman with young children decides to leave town immediately, not even going home to pack a suitcase. But before we can say KFC, the birds display their most deadly attack yet…blowing up cars, burning down buildings, and mutilating every human within pecking distance. Rambo has nothing on them.

Any normal person would get the heck out of Dodge. Not Mitch, Melanie, and Mother. They choose to board up the windows and hunker down for the next assault. Of course, if they’d left Bodega Bay, the movie would be over—and we’d miss watching Melanie creep up the stairs to the attic, where the birds lie in wait. We’d also miss Mitch’s heroic rescue of Melanie. And, more importantly, we’d miss Mother’s satisfied smirk as she lovingly strokes Melanie’s hair, pleased that she’s reduced this confident, lively woman to a catatonic vegetable—with the help of the birds, of course.
Posted by Luana Krause at 6:46 AM

I have never seen this movie! But now I really want to. You've given me so much to look for. Crazy birds, crazy people, crazy fashions...what's not to love?

Thanks for reading, Jenny. Yes...you absolutely MUST see The Birds. My other Hitchcock faves include Psycho, Rear Window, North by Northwest, Vertigo and Marnie.

I've watched this movie several times in the last 47 years, but never fully appreciated it until I read your witty review.

My favorite section: But before we can say KFC, the birds display their most deadly attack yet…blowing up cars, burning down buildings, and mutilating every human within pecking distance. Rambo has nothing on them.

Thanks, Danny. I had a lot of fun with this. The Birds is classic Hitchcock.

Great post, I am almost 100% in agreement with you