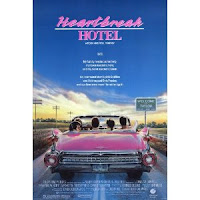 Years ago when there were such things as video rental stores, I was browsing the aisles looking for a movie and I struck gold with Heartbreak Hotel (1988): a 17 year old boy borrows a pink Cadillac and kidnaps Elvis Presley. Why? So Elvis can go on a date with his mother.

The movie is set in the 1970s and Elvis (David Keith) is on tour. He just happens to be performing near the town where Johnny (Charlie Schlatter) lives with his widowed mother (Tuesday Weld) who is a huge Elvis fan. Unfortunately, Mom has an abusive boyfriend and she is depressed and miserable.

One night the boyfriend beats her up so badly she ends up in the hospital. Johnny wants more than anything to make his mom happy, so when he finds out that Elvis is performing in a nearby city, he decides to kidnap the King and bring him home to Mom.

Meanwhile, Johnny and his friends are in a rock band and the high school is having a talent show. The school officials don't like rock and roll won't allow the band to perform. Johnny is also having girl trouble. Elvis to the rescue.

The cool thing about this movie is that the story is such a bizarre fantasy but played so realistically. You empathize with Johnny and his situation. And you're happy for Elvis as he's enjoying hanging out with this family in this small town being an average guy and living a normal life for a while.

This clip is from the high school talent show where Johnny and his band are performing with a surprise guest vocalist.

I enjoyed the video and reading your essay - I like the premise of the story. Interesting that it's a fantasy story but shown in a realistic way.

Hi, Anthony: It's a pretty strange story, but I enjoyed it. David Keith does a passable Elvis impersonation, but I think Kurt Russell is better.

It is a sweet little movie - got kind of swamped by other movies during its theatrical run, but did pretty well on home video. I'm glad you gave this one props, Luana; like a lot of cool movies from this period, this flick is almost lost - no cable showings, not on DVD (I don't think it is, at any rate) and consigned to whatever VHS tapes are out there. Thanks for posting it!

Craig: You're right. I never would have heard of it if I hadn't been browsing the comedy section of the video store. And I couldn't even watch it if I didn't still have a functional VCR player.