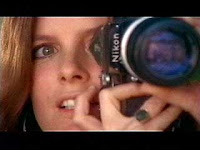 The Stepford Wives (1975) starring Katharine Ross and Paula Prentiss made its debut when the feminist movement was in full swing. The movie touched on such important women's issues as marriage, children, career, consciousness-raising, going bra-less and bell bottom hip huggers.

I will say here and now that the remake was awful. I don't understand why Hollywood can't leave the classics (even the cult classics like this one) alone. It's a disgrace. Come up with original ideas already!

Based on the novel by Ira Levine, who also wrote Rosemary's Baby, The Stepford Wives is terrifying. And while we're not dealing with a woman who had Satan's baby, it's almost as bad: a group of sexist husbands "transform" their wives into subservient, sexy robots. Now that's just plain evil. At least from a woman's perspective.

this is an oldie, but a goodie for sure

baygirl: I love this movie. I was 18 when this movie was released. I can't believe the clothes and hairstyles! So strange to watch the retro styles. I remember the nightmare ending...definitely not a "happily ever after" story.

I read the book, and loved it, so I never watched either movie. And I generally stay away from remakes, because they just never seem to be any good.

I've never seen it, but now I'm going to if it comes on TV.

lisa: Terrific book! I have it in my home library and it's a keeper. I've been looking for Rosemary's Baby. I read it years ago and want to read it again.

lisa: Terrific book! I have it in my home library and it's a keeper. I've been looking for Rosemary's Baby. I read it years ago and want to read it again.

Belle: It should be on TV sometime. I really like Paula Prentiss...she's the comic relief. And she is stunning! The woman who plays the therapist reminds me of Joanne Woodward in "Sybil."

Terrific movie - mixes scares, thrills, some laughs, and even a little commentary on the human condition. Not bad for a movie about guys with REALLY high tech blow up companions. I skipped the remake completely - it was too obvious they couldn't even lock down a tone, let alone do the story justice in some kind of new way. But the original is a gem. Here's something I haven't had in a while - the connected anecdote! A long time ago I attended a theatrical makeup seminar with a man named Bob Kelly. Bob was a New York City makeup artist who became the go-to man for hair and beards and such, because he was REALLY good at it. He gave a very entertaining talk, complete with a full on makeup demonstration on a willing participant - guess whose "wide face" he used? ;) Well, anyway, at one point he tells a story about doing some hair work on The Stepford Wives. And let me say here - SPOILER ALERT! DO NOT READ THE REST OF THIS IF YOU HAVEN'T SEEN THE MOVIE!!!

At the end of the movie, Katharine Ross's "boyish" figure has been...enhanced, shall we say, with what might be crassly termed a "rack" thanks to the design work that went into her replacement. Well, that enhancement was courtesy movie makeup god Dick Smith, all latex. At the end of filming, Smith gave Bob a set of the giant latex breasts, which Bob Kelly then proceeded to whip out and toss around the audience during the seminar. I did get my hands on them, so I feel like Katharine Ross and I know each other pretty well for having never met! Splendid choice and post Luana!

The re-make was truly awful!

That is amazing. You're like Waldo. You're everywhere. LOL. I did notice the breast enhancement and had no idea how they did it. Nowadays it would be easy with computers or other SFX. Bob did a great job...they look real. And I guess you can attest to the fact that they felt real. So you can add to your resume that you touched Katharine Ross's breasts. LOL.

I was impressed with the black eyes. Did they use some kind of weird contact lenses? It was SO CREEPY!

Dorothy: You are right. I would say it was one of the worst remakes in history. I think the main reason it didn't work was the social climate. In the 1970s women's rights was a big issue and this film was about women and their struggles to be heard in society. Thus the idea of making women into housewives and sex kittens was a direct contrast to the women's movement. In fact, the subplot was Joanna wanting to pursue her dream of being a photographer, but to keep her family happy she moved to the suburbs. The remake didn't have that foundational concept so the basic idea for the movie just doesn't work. To me, that is what makes the original so good...women can relate to the conflict between career and family. They tried to modernize it but it fell flat.