Planet of the Apes and Midnight Cowboy 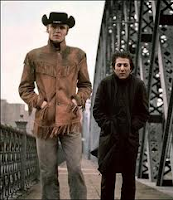 Check out the trailer to Rise of the Planet of the Apes. It looks amazing! Will be released in August. Hubby and I will see it on our anniversary!

In other news, I'm watching "Midnight Cowboy" again. Haven't seen it in years. Great casting for Joe Buck (Jon Voight), but Dustin Hoffman as Ratso? He did a good job with the part but I would have chosen another actor. Not sure who...

I now want to watch it ;-D
I hope the new Ape movie will do justice to the original~

Good choice in Midnight Cowboy for visual inspiration - it's not a showily directed picture - but Schlesinger juggles the actors handily, connotes a time and place with flair, and does it all in an ubobtrusive, almost documentary like style. Great movie.
I am interested in the Apes movie, but not quite as excited about it as everyone else seems to be. The originals are some of my faves of all time, flaws and all. I hope this new one works. Hope you guys enjoy it on the big day!

Ella: I had no idea another Ape movie was in the works. I think this one will be better than the Mark Wahlberg one. I wasn't a fan.

Craig: This ape movie seems more sci-fi than the others. Kind of like Jurassic Park...but with apes instead of dinosaurs.

Midnight Cowboy is one of those amazingly strange movies that bores into your soul. As for the filmmaking itself, everything works. I like that it's not really about male prostitution but when you dig a little deeper, you see that lonliness is the theme. The music expresses this idea perfectly.