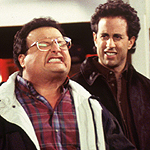 Today is Newman's birthday! Well, actually, it's actor Wayne Knight's birthday. Born August 7, 1955, in New York City, Wayne Knight was perfectly cast as Jerry Seinfeld's annoying neighbor and nemesis. One of my favorite episodes was "The Boyfriend."  Newman and Kramer were describing how Keith Hernandez spit on them after a Mets game as Jerry interrogated them in a parody of the movie "JFK." Here's the scene:

NEWMAN: June 14, 1987.... Mets Phillies. We're enjoying a beautiful afternoon in the right field stands when a crucial Hernandez error to a five run Phillies ninth. Cost the Mets the game.

KRAMER: Our day was ruined. There was a lot of people, you know, they were waiting by the player's parking lot. Now we're coming down the ramp ... Newman was in front of me. Keith was coming toward us, as he passes Newman turns and says, " Nice game pretty boy.". Keith continued past us up the ramp.

NEWMAN: A second later, something happened that changed us in a deep and profound way front that day forward.

ELAINE: What was it?

NEWMAN: Then I turned and the spit ricochet of him and it hit me.

ELAINE: Wow! What a story.

JERRY: Unfortunately the immutable laws of physics contradict the whole premise of your account. Allow me to reconstruct this if I may for Miss Benes as I've heard this story a number of times. Newman, Kramer, if you'll indulge me. According to your story Keith passes you and starts walking up the ramp then you say you were struck on the right temple. The spit then proceeds to ricochet off the temple striking Newman between the third and forth rib. The spit then cam off the rib turned and hit Newman in the right wrist causing him to drop his baseball cap. The spit then splashed off the wrist, pauses, in mid air mind you- makes a left turn and lands on Newman's left thigh. That is one magic luggie.

JERRY: What happened to your head when you got hit?

KRAMER: Well. uh, well my head went back and to the left.
JERRY: Again.

KRAMER: Back and to the left.

ELAINE: So, what are you saying?

JERRY: I am saying that the spit could not have come from behind ... that there had to have been a second spitter behind the bushes on the gravelly road. If the spitter was behind you as you claimed that would have caused your head to pitch forward.

ELAINE: So the spit could have only come from the front and to the right.

JERRY: But that is not what they would have you believe.


In "The Finale," Newman gives one of his most famous speeches:

"All right! But hear me and hear me well! The day will come, oh yes, mark my words, Seinfeld! Your day of reckoning is coming, when an evil wind will blow through your little playworld and wipe that smug smile off your face! And I'll be there in all my glory, watching, watching as it all comes crumbling down."
Posted by Luana Krause at 6:52 AM

That was a funny episode. I hope Newman had a great birthday.

I also liked the one where he was the go-to guy for Elaine's problem with the barking dog. Of course, being a mail man, Newman would be an expert on that subject.