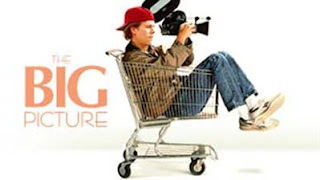 A to Z Blogging Challenge: Movie Memories
Blogging about the movies that made an impact on my life
When I graduated from high school in 1975, I dreamed of going to film school in L.A. I wanted to be the next Spielberg. Alas, that never happened. God had other plans for me. And who am I to argue with God?

Nevertheless, when I saw The Big Picture (1989), I was immediately taken with the premise of a young film student who wins an award and begins "swimming with sharks" in Hollywood.

After Nick (Kevin Bacon) wins the award, he becomes a hot comodity and studios are courting him to do a movie. Nick eventually signs with Allen Habel (J. T. Walsh).

The story for Nick's film was a dramatic love triangle among 40-something characters, filmed in black and white and set in an old house during the winter. But the Hollywood movers and shakers turned it into a summer sex comedy with babes in bikinis, frat boys getting drunk and wall to wall pop music.

Nick butted heads with the studio, but his ideas were dismissed one by one. Although he enjoyed the perks (nice car, great house, fame and fortune) he had become a cog in the Hollywood, money-making machine. He was miserable.

Eventually, Nick loses everything. His movie, his girl, his best friend. He learns his lesson, but it all changes with a grilled cheese sandwich.

An excellent idea for your A to Z! I can't wait to see the rest of the movies on your list!

I've never seen The Big Picture, but I like Kevin Bacon in pretty much everything he does.

Lana: Thanks for posting! I'm watching your blog as well.

I don't think I ever saw that movie and if I did it has been purged from my memory like so many other things.

Good luck with the A-Z Challenge! So far it's pretty cool!

This is the most original A-Z post I've seen so far. Way to go. I haven't ever seen The Big Picture.

Thanks for stopping by my blog. :)

Sherri and Michelle: Thanks for stopping by! The Challenge is so much fun.

I never saw this movie, but I'm going to find it now. Thanks for the B!

I've never seen this...I may have to add it to the netflix list!

This sounds like a great movie, I will have to check it out.

great flick, great idea!
we all need little zombies in our lives, even if they bite... a little.
jeremy [iZombie]

What a great theme for A-Z! I've never seen your "B" movie, but I did like Annie Hall. I have a feeling at the end of the month, I'll have a lot to-see movie list!

Sweet thoughts, Now I want to see this movie! I don't remember it...
Thanks for sharing~Nice to meet you!

Hello, Ella. Yes, it's a great movie. Thanks for reading.

I've never seen The Big Picture, but I clearly need to put it on my list!
Alison Pearce Stevens

Hi, I found your blog through the A-Z Challenge.
gigglelaughcry.blogspot.com

I like your site...noticed the sprinkling of Oz references, and couldn't resist. Thanks for stopping by and following :~)

another great movie! wonder what is on the works for C

It is a great idea for your A-Z.
I'm rather more haphazard with mine.

Grease was the big picture that shaped my life as a young 10/11 year old. We used to act and sing it out in the school playground and argue who would get the part of Sandy!

Great to make your acquaintance.
Best of luck with the challenge and look forward to following your progress and writing.

Hello, Giggle! Thanks for checking in! Happy posting.

Kathy: Yes, I'm a Wizard of Oz fan. Such an amazing story and film! Thanks for stopping by.

Baygirl: I'm getting ready for Monday. Hope I can keep up the pace. It's going to be a long month, but a lot of fun.

Hello, Bluestocking Mum! Grease was an awesome movie (and stage musical). Gotta love Travolta! When I sing karaoke, I like to sing the "Summer Lovin'" duet.

I've never seen that movie. I'll have to check it out. I also plan on checking out the rest of your A to Z posts and am now a follower.

Kristin! Great to meet you. I'm following you, too. Thanks for posting.

Fantastic choice! Kind of a forgotten gem! I was trying to break into the film business when I saw this movie - and it struck pretty close to home - although I did it by charming my way into crew work and trying to climb the ladder, as opposed to selling a script or making a movie that wows the crazy Hollywood hoi polloi - but a very funny movie - and worth seeing, or seeing again! Thanks for posting it!

Craig: I think people who enjoy film (filmmakers, writers, actors, critics) can relate to this story. A more modern version with a different slant is The Muse...one of my favorite Albert Brooks films.