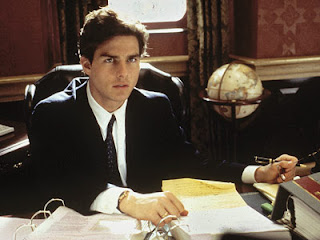 A to Z Blogging Challenge: Movie Memories
Blogging about the movies that made an impact on my life
It was the summer of 1993 and my hubby had just retired from the Air Force after 23 years of service.He was fairly young at the time (41) and was ready to start a new career outside the military.
Needing to save money, we moved in with my parents for a few months during the transition period: me, hubby, our daughter Jennifer (16) and son Luke (13). So we trekked from Vandenberg AFB in California where we'd lived for seven years, to my folks house in Stroud, Oklahoma. Well, they actually lived five miles outside of Stroud, in a farmhouse on 80 acres.

We were officially in the boonies. No phone, no lights, no motorcar -- not a single luxury. Well, maybe it wasn't that bad. Fortunately, we could escape our troubles by going to the movies. The nearest movie theatre was 12 miles away and that summer The Firm (1993) was playing.
I was captivated right from the beginning as Dave Grusin's score filled the theatre. The music inspired me and my son to learn jazz/blues piano. To this day we play piano music from The Firm. He's currently taking on "Ray's Blues." It also opened up the door to John Grisham's novels. The week I saw the movie, I bought the book and I've been a Grisham fan ever since.
The Firm is one of my favorite Tom Cruise films, along with A Few Good Men and Jerry McGuire. It's about a young lawyer fresh out of Harvard who is hired by a firm. He's given all sorts of perks, such as down payment on a new home, new cars (for him and his wife), payment in full on his student loan, plus a hefty salary. But the dream ends when he discovers that the firm is run by the mob.

Here's a sound clip of "Memphis Stomp," from the sound track performed by Dave Grusin.

I'm not a big Tom Cruise fan, but I did like The Firm. Of course, I think I've read everything Grisham by now.
Nice post on the A to Z Challenge.

Actually, I must admit that I have NOT see The Firm...Why, don't know but will explore on Netflix to see if I can get it...Thanks for the intriguing account of you and your family~!! Loved the Jazz video...

See you for "G", (hopefully in a more timely manner)

Susan: Thanks for dropping by. Grisham is a great writer but for some reason most of his characters end up in the witness protection program.

Margaret: I still have it on VHS! However, I bought the soundtrack right after I saw the movie. I wore it out and had to buy another years later. This was before youtube and mp3.

Anyone who pays tribute to one of my favorite movies of all time, no not the firm,The wizard of oz, has got to be on my daily run list. A-Z next...

Hi, Siv! Thanks for stopping by! You're not in Kansas anymore!

I liked the book, but didn't care for the movie so much, possibly because tom Cruise didn't fit my idea of what the character should look like. Which is why I usually either read the book or see the movie but not both.

LOVE this movie - I was a Grisham fan since Pelican Brief - have kind of died off and haven't read one in a while, but I used to buy them as soon as they hit the shelves!

New follower from A-Z. Nice to meet you!

Lisa: I have the same problem when I read a book then see the movie. It never measures up to my expectations. And it's usually never as good as the book. The worst case for me was A Time to Kill (Grisham). I had read the book first, which was amazing. In my opinion, it was Grisham's best novel. Interestingly, it was also his first novel and had been rejected by the publishers. After The Firm became a best seller, the publishers wanted A Time to Kill. (They smelled the money from a mile away). I hated the movie because they ruined it. The original story was about a black man in the rural South who was on trial for murdering a white man who had raped his daughter. But the movie brought in a love interest for the lawyer (not in the book) and omitted important scenes between the lawyer and his defendant. I couldn't believe it. Totally egregious!

Hi, Alison: I LOVED the Pelican Brief. I've been thinking that the story of John Grisham himself would make a good movie: Baptist Sunday School teacher and lawyer from the South, becomes a best selling author of crime novels. Matthew MaConnaughey stars. LOL

I have to admit I now can't really watch Mr. Cruise without thoughts of his mental status overshadowing the movie - but I saw this in the theater when it came out - and it was a terrific thriller. I haven't read the book, but I might give it a try one of these days. Excellent choice, well posted! Thanks and cheers!

Craig: Thank God I saw it before the break down when Cruise was in his prime. It's hard to separate the actor from the movie when things like that happen.