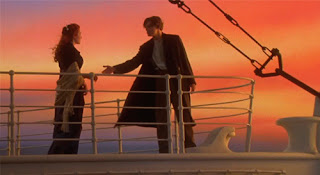 Blogging about the movies that made an impact on my life
The first time I'd heard about Titanic (1997) was during a preview of coming attractions at the theatre. I knew right away I'd want to see the movie. I enjoy historical dramas and get a kick out of seeing the creative use of sets and costumes. I was also intrigued by the dramatic true story of the RMS Titanic and was looking forward to a newer version of the movie.

Sometimes the hype surrounding a  movie ruins it, which is why I purposely refused to read reviews, watch interviews or see any previews or promotions about Titanic. I wanted to see it without any pre-conceived notions.

I think it's because of this that the movie affected me so profoundly. It was literally heart wrenching. I remember actually sobbing at the end. I could hardly stand up and walk out the theatre door. No movie before or since has had such an emotional impact on me.

The film left such an impression that I couldn't watch it again for years. I was like an astronaut going to the Moon and returning to Earth. I would never be the same. Maybe I'm being over-dramatic, but this movie captured my heart and wouldn't let go.

The score for this movie was a key element in creating the emotional connection. The music haunted my dreams and even today, when I hear the theme song, I'm reminded of Rose and Jack's tragic love.  I guess I'm a hopeless romantic after all.

I remember husband getting us tickets to opening night, the place was packed, and all you could hear were people crying all around! There was that one scene that got me all choked up, but it dind't result in tears.

great choice, titanic is on my fav movie list

baygirl: I'm wondering what other people's experience was when watching this movie. It's like "where were you when Kennedy was shot...or where were you on 9-11?"

I went to see this shortly after it opened - but not on opening day - that ticket was reserved for my old friend James Bond as his then newest - Tomorrow Never Dies - opened the same day as James Cameron's historical drama. I was not happy that the studios had deciced to put these two head to head - as I was absolutely sure Titanic was going to have audiences packing in. Thankfully, they both did okay fiscally - well, let's clarify that - TND did okay - Titanic turned into a printing press for Cameron to print his own money. I was knocked out by Titanic - the cold authority Cameron brought to the historical reproductions of the great ship mixing well with the warmth of the love story. I saw the last reel through a salty liquid veil - and I'm not ashamed to admit it.
I agree that the score is a vital element in the movie's appeal - and I'd like to point out that composer James Horner got his start with my blog's old pal Roger Corman - Horner composed a terrific soundtrack for Corman's Battle Beyond the Stars in 1980. So sometimes the little B movies I like to champion do help the big boys down the road! Thanks for this post - it was a fun trip back to 1997!

Yes we have it on DVD, there are some great moments in it for sure :O)

I also cried when I watched this! Actually it was a bit of an embarrassing situation, watching this movie. I was about 13 and I watched it with both my mom and dad and I think I cringed the whole way through the scene in the car (y'know, the SEX scene!).

I remember when it was released it seemed the theme song was on the radio every morning when my alarm went off for months. It was great.

Craig: That's interesting about Horner and Corman. Horner's score was perfect for Titanic...I can't imagine any other song that would have the same impact. Glad that you admit the tears...I went with my son who was in high school at at the time... and he was crying too.

Madeleine: I never bought the DVD. I just couldn't bring myself to watch it again...although I have seen bits and pieces when it aired on the movie channels. I think I'm ready to watch it from start to finish once more.

Rachel, I remember that scene, and yes it would be embarrassing to watch with your parents. YIKES! I really enjoyed the ice berg scenes...well done. I also like the scenes in the lower decks where the water was flooding and people trying to escape. I was crying through the last 15 minutes or so, but the tears really started flowing after the older Rose died and met Jack at the top of the stairs in the "afterlife."

Susan: The song was beautiful...Titanic is a fine example of the perfect film score. I also like John Williams' score for "The Cowboys"...the opening titles montage is AMAZING!

Great choice! As you know, I went with a Cameron film too. I was considering Titanic, but my friends would never let me live it down if I chose it (jk). Actually, I'm just a sucker for strong and sensible action films, so I went w/Terminator 2.

Yes, Titanic was a movie that had me riveted to my seat, even though I had to pee sooo badly. (It was 3 hours long +). Every time I hear the music I go back to that same emotional state.

Matthew: There were lots of great T movies to choose from. I'm a fan of the Terminator films, too.

Susan K: It was a long movie, but for me, time stood still. Thanks for stopping by.

I loved the music before I saw the movie. Odd, isn't it?

My RITES OF PASSAGE is ultimately a fantasy TITANIC -- underneath the danger lies the love of two people who had given up on ever finding their soul mate. And the end of its sequel, ADRIFT IN THE TIME STREAM, was something I crafted to be worthy of the end of TITANIC which moved me as much as it did you.

It truly was worth ten years of James Cameron's life to make. Happy Easter, Roland

Oh, great film. I enjoyed it. I know a lot of friends and family who watched multiple times as well. There's something about a tragic love story, it's always compelling.

I loved this movie too. Historical movies that have such a touching human story are the best.

I have the soundtrack for Titanic and the theme music for Cowboys. Both are great.

In Branson, MO there is an exhibit of the Titanic, the stairway, the hull. All kinds of stuff life-size. Very neat. Makes you feel like Rose standing at the top of the stairway. *sigh*

Roland: That is interesting that the music drew you before you saw the movie...must have been magical when you actually saw the music and film together.

Talei and Shelley: Thanks for stopping by...this movie is amazing.

Huntress: That is so cool about the Titanic exhibit in Branson. I would love to stand on the staircase...

I liked this movie before the hype. I saw it in high school and I thought the love story was terribly romantic. But now the idea of watching it makes me groan. Sometimes I wish it didn't have the success it had because it made me like it less!

Melissa: You're right...too much hype can ruin a movie. Sometimes trailers can ruin a movie if it shows the best scenes. There is a way of promoting a film so that the element of surprise is preserved. Hitchock went above and beyond when he promoted Psycho.

My boys and I LOVE Titanic. We've watched it again and again.
x

Bluestocking Mum: It's a great movie. One of the best. I need to watch it again for sure.