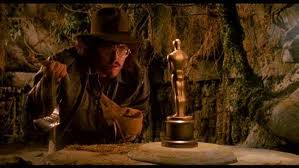 A to Z Blogging Challenge: Movie Memories
Blogging about the movies that made an impact on my life
I'm a die-hard Weird Al fan! Have been since the 1980s when I saw his Michael Jackson parodies. The next thing I knew I was buying his cassette tapes (and later his CDs). I even went to a Weird Al concert a few years back when he was on his Running with Scissors tour.
As a comedy writer, I enjoy writing parodies of songs, TV shows, commercials and movies. Weird Al and Mad Magazine have been my inspiration.
I learned the lyrics to all his songs, including Fat, Like a Surgeon, Eat It, Yoda, Smells Like Nirvana, Amish Paradise, Bedrock Anthem, Grapefruit Diet, etc.
In UHF (1989), Weird Al plays the owner of a TV station. It's the perfect set up for his movie parodies which include Gandhi, Rambo, Conan the Barbarian and Raiders of the Lost Ark. The highlight of the movie is his music video "Money for Nothing/Beverly Hillbillies."
I'm not crazy about the movie itself; bad acting, lame script, predictable plot. Maybe that's why he hasn't made anymore films. But he's a genius when it comes to music video comedy.
Trivia: Michael Richards (Kramer on "Seinfeld") plays a goofy janitor.
Posted by Luana Krause at 5:31 AM

Have you heard Weird Al's take on Lady Gaga's Born this Way? Hilarious!

Have you heard Weird Al's take on Lady Gaga's Born this Way? Hilarious!

I have to admit, he does crack me up sometimes. And now I have to go check out his take on Lady Gaga. :)

Jennee and LG...I'm totally gonna check that out!

Oh, now I have to check it out, too! Weird Al caught us with "Eat it!" years ago. Thanks for bringing him up with "UHF".

I haven't seen all of Weird Al's stuff, but we absolutely love his Star Wars song, The Saga Begins. :)

Michelle: The Saga Begins was great! One of his masterpieces.

mymy: Me too! A funny, talented fellow.

I agree on all fronts. Love his music. I was so excited for the movie and then it fell flat.

Good luck on the rest of the A to Z Challenge!

Oh, I think this is one of the great unheralded comedy gems of the 80's - a classic of the Completely Goofy Comedy genre - and one of my faves! I gave a copy of this to my brother-in-law for Christmas a couple of years ago - he had missed it in the 80's as a single father - and he's still talking about it! Wonderful choice Luana!

Craig: A true Weird Al classic! He was (is) a comic genius. Thanks for stopping by!