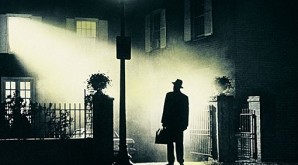 A to Z Blogging Challenge: Movie Memories
Blogging about the movies that made an impact on my life


I was 16 when I read William Peter Blatty's best-selling novel "The Exorcist" and it was absolutely terrifying. It remains the scariest story I have ever read.
I remember sitting on the porch steps, intently absorbed in the book, when my mother came out of the house and touched me on the shoulder. I jumped 20 feet and let out a blood-curdling scream. I was a nervous wreck for weeks and afraid to go to bed. To make matters worse, my bedroom was in our unfinished basement, so when I was in bed I could see shadows from the wooden beams in the ceiling. With my wild imagination, it's a wonder I slept at all.
When the movie came out, Mom wanted us all to go see it as a family. My dad and brother were on board, but I absolutely refused. She was surprised by my response because I NEVER pass up an opportunity to go to the movies. That's when she realized this was serious business.
It wasn't until I was in my 20s that I found the courage to watch it when it aired on TV. I had to sleep with the light on for weeks.
Once I got beyond the frightening plot (a young girl possessed by a demon), I began to see the artistic merits of the film. What struck me the most was the theme music. "Tubular Bells" by Mike Oldfield was a perfect match for this movie. The bizarre dissonance and random tones sound like an evil spirit.
The Exorcist was nominated for ten Academy Awards including Best Picture. It won two: Sound and Adapted Screenplay.

Interestingly, there were several deaths connected with the making of the film.
Posted by Luana Krause at 5:04 AM

I still have yet to watch this movie. It's on my long list that I hope to cross off someday!

Jennee: I've actually only watched the watered down TV version...Don't know if I could handle the unedited version.

I watched this movie when I was 16. It was the first of a few that I swore off forever and I do NOT plan on ever seeing this movie again. Not only that, but it was instrumental in my swearing off horror movies altogether.

Just the thought of watching the movie or reading the book gives me chills.
I haven't done either. What a coward I am...LOL.

Poltergeist scared me silly and by all accounts, eXorcist beat that movie in the fright category.

I saw this as an adult, and I didn't find it overly scary. The birds I saw as a child and that show scared the crap out of me, birds still freak me out a bit.

Marjorie: I couldn't imagine watching this movie ever again. Or reading the book. I hate horror movies, but I do enjoy reading Stephen King...to me he's more psychological thriller than horror. The movie adaptations of his stories are not that great imo, although I did enjoy The Green Mile and The Shawshank Redemtion.

Huntress: Do not read the book. Do not watch the movie. You are much better off.

Spenc: For me the scary thing about The Exorcist was the idea of demon possession, which I believe actually exists. In fact, the novel was based on true events. Monsters, vampires and zombies I can handle.

You brought back memories. I was 12 when I went to the theater with friends. I can remember a boy I had a crush on sitting behind me. He had seen it and kept warning me, when it was going to get bad. I wish I had been sitting by him. It was a fun, scary evening. I am so glad I didn't read the book. I grew up in a house near the bay and the wind would howl and branches scratched my window at night. I would of freaked~ I am glad you finally saw it! I am sure the book, really brought it to life...now I want to read it, on a bright sunny day!

Ella: Must have been hard to concentrate with a boy you liked sitting behind you. LOL. This is one movie I will never watch again.

I have not read this book or seen the movie (is this the one with the girl crawling like upside down backwards down the stairs? Cos wherever that scene's from it FREAKS me out!!) and I DO NOT plan to! The scariest book I've ever read was The Shining.

Rachel: I only saw The Exorcist once about 30 years ago and I think there is a staircase scene. The Shining creeped me out, too. I read the book and it was much worse.

Definitely one of the scariest movies ever made bar none. My mom took me to see this in probably 1978 on a rerelease with the Japanese Star Wars ripoff Message from Space (?) at a drive-in. It frightened me a LOT. I still love horror movies - and this one will always be one of my favorites. One thing I found out about in recent years was the subliminal imagery director Friedkin added to the flick - have you seen the eerie face he used? You can Google search it in images (Exorcict subliminal would do it) - it's a mighty creepy countenance Friedkin would stick in as a frame or two in certain sequences to make the viewer feel more uneasy. It works! Great choice Luana!

Hi, Craig: My family also saw it at the drive-in. Mom told me she wanted to leave when things started to get hairy, but Dad said, "We paid for the movie and we're going to watch it." Mom put her fingers in her ears and closed her eyes so she wouldn't have to hear (and see) the demon sounds.

That's interesting about Friedkin's images. If I ever get up the courage to see it again, I'll keep an eye out. Thanks for stopping by.