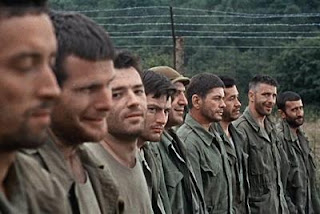 A to Z Blogging Challenge: Movie Memories
Blogging about the movies that made an impact on my life
My mother married my step-father in the summer of 1968 and we started a new life. (I was 11 and my brother was 9). Not long after that, the local drive-in was showing The Dirty Dozen (1967), so we all piled into the car and went to the movies. It was the first movie we saw together as a new family.
Even though I was just a kid, this film made an impression on me. I developed an interest in World War II which lasted my entire life. I was captivated by the story of these men and the things they had done that brought them to death row.
A few years later, The Dirty Dozen was on TV, and as an emerging dramatist, I watched the credits carefully. That's when I discovered that the film was based on a novel (by E. M. Nathanson). It wasn't the kind of book your typical 15-year-old girl would read. But I wasn't your typical 15-year-old girl. I rote it out as a script. My brother and I played the different characters, and we used the movie as our inspiration.
Posted by Luana Krause at 4:41 AM

I remember watching this with my dad. I bet I've seen a lot of the westerns & 'military' movies you did growing up!
Thanks for stopping by my blog!
gigglelaughcry.blogspot.com

Hi, Giggle: I think you're right. Both my parents were fans of Westerns. "Gunsmoke" was a family event every Sunday night.

Gosh I haven't been to a drive-in in years. Brings back memories.
Thanks for dropping in to thefeatherednest.

Gee, you are pulling out all the GREAT, fave movies of mine~!! Roughnecks were my style, I suppose..lol

I remember watching this film when I was growing up as well. Not sure if I saw it with my Dad, a WWII vet. It's a really good movie.
Karen

I've never seen this movie either. I think that it is cool that you read the book after seeing the movie. Sounds like something I would have done.

mybabyjohn: Drive-ins are a relic. There were still a few left in the 1980s and I took my kids to some shows.

Hi, Margaret: Yeah, I liked roughnecks, too. Lee Marvin was amazing back in the day.

Hi, Karen: They don't make movies like that anymore. Interestingly, it was filmed during the Vietnam War when America held a different attitude toward war.

Marjorie: I often read the books after seeing the movie. I did that with Lord of the Flies and the Firm.

Love your movie theme for the Challenge!

Another movie I've never seen. I'll have to remedy that :)

Hi, Huntress: I chose movies because it's one subject that I never run out of things to say. Thanks for posting!

Kristin: It's a great movie. Let me know what you think.

I watched this movie on TV with my dad. There were so many great actors in that movie. We loved it.

Sharon - Grandma is a Writer said...

I think this is another one I never saw - or if I did, I don't remember it so it obviously didn't make a big impression.

Thanks for your visit and comment on my Ditch and Disappeared blog entry.

Susan and Sharon: Thanks for stopping by. Lovin' the challenge!

The epitome of the "guy's movie" and you have performed it more often than Ernie Borgnine and Telly Savalas (and they were in the TV movie sequels!) I enjoyed these ensemble action flicks of the 60's, and loved that they've kind of come back with The Expendables. Another terrific post! Thanks!

Craig: I enjoy the ensemble casts too. This one was MAJOR! Thanks for stopping by.