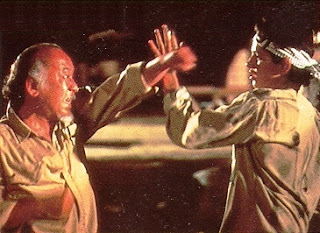 A to Z Blogging Challenge: Movie Memories
Blogging about the movies that made an impact on my life
In 1984, Hubby was on TDY (temporary duty) in Sicily for a year. It was a remote assignment which meant the kids and I could not go with him. If you were ever a military spouse, you know what it was like.
At that time I was going through emotional struggles in my life. I had just graduated with my MA degree and was looking for work. And with my husband in Sicily, I was both Mom and Dad to the kids. I was lonely and miserable.
Then the Karate Kid (1984) shows up. I had no real desire to see it; I just thought it was a silly kids' movie. How wrong I was! The story of a young man learning about life, changing his perception of the world and developing a lifelong friendship was something that touched me on a very deep level.
I empathized with Daniel from the very beginning. He came from a broken family (like me) and was moving to a new school and a new city (yep, me too). I could relate. I don't remember how many times we moved and I had to start all over. Making friends is not easy. I had an immediate connection with Daniel which carried me through the story.
Daniel's relationship with Mr. Miyagi was beautifully portrayed. I loved the scene where Daniel was accosted on Halloween night by the bullies and Mr. Miyagi leapt over the fence to defend him. There was a lovely shot of Mr. Miyagi posed for battle in the fog, slow motion...it was surreal.

MIYAGI: Man who catch fly with chopstick accomplish anything.
Posted by Luana Krause at 5:57 AM

Love the original movie and the re-make. Great choice!

Karate Kid is a classic. I love the old version so much better than the newer ones.

Huntress, Katie: I absolutely love the original. Not into remakes of any kind. My movie philosophy is "don't mess with the classics."

The Karate Kid is a great movie!

Hi, Marjorie: A nice blend of comedy and drama.

Great personal story and fantastic "K" choice! As a movie lover, I was thinking about spotlighting this one myself. Well-done.

Hi, Matthew: Movies is one thing I always have an opinion on...that's why I chose it for the A to Z. Great to meet you!

mymy: It's one of my favorites, too.

My kids just watched and loved this movie!!

Checking you out from the A to Z challenge. I hope you will stop by my blog, Thoughts from Tiffani, too!

Saw this one Sunday afternoon in 1984 at Tolerance Cinema in Benton Illinois. It was one of the most satisfying movie experiences I ever had. Ralph M's foot + Billy Zabka's face = movie bliss. I have not seen the remake - might, might not. But I love the original! I also enjoy the biographical ties you bring to the post - it makes for good reading!

Tiffani: Thanks for stopping by. Glad your kids like the original Karate Kid...a true classic.

Craig: I don't think I'm going to see the remake either. The original is just too perfect. So true about Ralph's foot..LOL

classic film. what a great idea to do movies for A-Z.

Michelle: I figured movies was a pretty a good category for me. It's my passion. Thanks for visiting!