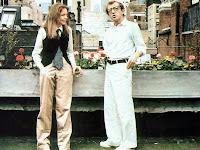 A to Z Blogging Challenge: Movie Memories
Blogging about the movies that made an impact on my life
When I was in high school in the mid-1970s, I was a huge Woody Allen fan. While my friends were pinning up posters of Three Dog Night, I was reading Woody's essays in the New Yorker. My infatuation with Woody began in the 1960s when I started listening to Bill Cosby's comedy albums. I especially enjoyed "chicken heart." I've been a fan of stand-up comedy ever since.

In the 1970s, stand-up comedians were often featured on TV (Steve Martin, George Carlin, etc.) and that's when I first saw Woody Allen perform. I loved his dead pan humor, his neurotic mannerisms, and his pseudo-intellectualism. Something in my soul related to his style of humor. So much so, that he inspired me to become a comedy writer.

Annie Hall was released in 1977 and I couldn't wait to see my favorite comedian in a feature film. I was impressed with Allen's brilliant script and his innovative filmmaking techniques, such as breaking the fourth wall and the creative use of animation and flashbacks.

Also, as a young woman, I was influenced by Annie's fashions. I started wearing men's shirts, neck ties, baggy trousers and vests. Her masculine style was well suited (no pun intended) to my personality at the time. I was not a girly-girl.

ALVY: A relationship, I think, is like a shark. You know? It has to constantly move forward or it dies. And I think what we got on our hands is a dead shark.
Posted by Luana Krause at 5:53 AM

I just rented this a few months ago...it's still a great movie to watch after all these years.

Loved Annie Hall! Also, loved the fashion of that film...I enjoyed your account of your movie sparked by the letter "A"...Good start...
Thanks for sharing...

I really like your slant to the A thru Z challenge : movies that left a memorable impression on you. Thanks for dropping by my blog today.

As Li said, there are some movies that still hold up after decades. ANNIE HALL is definitely one of them. Intelligently written scripts is one thing that they all share. Roland

I'm glad you did not choose Apocalypse Now!

Thanks for the comments, everyone. Glad to see Annie Hall has some fans!

Bob: LOL...I actually have a personal story to go along with that movie, but it's too depressing. Great movie, though.

I'm a fan of Annie Hall too. Great to meet you on the A2Z

Hi, Susan and Cindy! Thanks for reading!

Great start for A-Z! I read an interview with Sharon Stone once and she was asked which of her leading men she considered to be the sexiest. Her answer? Woody Allen. :)

Ooh, I have to say I haven't seen it! *gasp* But I shall definitely check it out now.

Great to meet you through the A to Z challenge! ;-)

Lisa: That's an interesting comment by Sharon Stone. Another thing about Woody Allen is that he is a jazz clarinetist and adores Big Band music of the 1930s and 1940s, as do I. If you watch his films, all of them feature this style of music. He also consistently lists casts member in alphabetical order. Very cool.

Hello, Talei: I'm hoping people who haven't seen these movies will check them out. If you get a chance to see Annie Hall, let me know what you think, even if you don't like it. I'm interested in people's opinions about films. Happy blogging!

movie memories! what a great way to take on the A to Z!

Kathy and Baygirl! Thanks for reading. I wanted to write about one of my passions, and movies rank near the top of the list. Thanks for following!

Sharon - Grandma is a Writer said...

I'm really out of the loop! I have never even heard of the movie Annie Hall. Sounds interesting. My excuse is that we lived in Brazil for 30 years!

Good movie. Diane Keaton is great in any role.

Hi, Sharon: Brazil? Wow! I'll bet you have some amazing stories. Thanks for posting!

Luana - I have been enjoying and totally appreciate your comments over at LGOOH- I brought up your profile but I somehow missed the link to your blog! (The blog links were further down than I expected - kind of new to all this!)Found it this time, though - I always enjoy a good movie blog! I'll be playing catchup the next few days - but I'll be up to date before it's all over! I saw Annie Hall as an exchange with a friend a few years ago - the deal was, I would watch one Woody Allen movie, (I had seen none up to that point) and he would watch one James Bond movie (he'd seen only a couple of them) We started with Take the Money and Run and proceeded through Purple Rose of Cairo before our lives took us in different directions (I have no idea where we were in 007 movies, but we could figure it out) Anyway, I digress. I enjoyed all of the the Woody Allen movies we watched, but Annie Hall was my favorite - I think because it was just as funny, but had a little more heart, and yet was not quite as introspective and wee bit indulgent as the next few after it. An inspired choice, and what a launching pad for the A-Z Blog Challenge! Cheers!

Craig: I look forward to your blog every day...I love movie blogs, as you can tell.

I love James Bond, too. Sean Connery is the BEST! The books aren't half as good as the films, IMO, which is typically not the way it is.