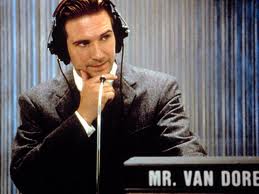 A to Z Blogging Challenge: Movie Memories
Blogging about the movies that made an impact on my life
I watched Quiz Show (1994) for two reasons:

1) It was Ralph Fiennes first film after Schindler's List. I've been a student of WWII and the Holocaust since my 20s when I first read Elie Wiesel's works (Night, The Oath, A Beggar in Jerusalem).

2) It was directed by Robert Redford, who also directed Ordinary People, one of my top ten all time favorite films. Quiz Show was nominated for four Academy Awards. In my book, if a movie has that many nominations, it's probably worth taking a look at.

It's based on a true story of corruption in a 1950s TV game show and the congressional hearing that followed. At the Oscars, Quiz Show was up against some pretty stiff competition:  Forrest Gump (winner of Best Picture), The Shawshank Redemption, Pulp Fiction and Four Weddings and a Funeral.
Excellent performances by Ralph Fiennes and John Turturro.

ALBERT FREEDMAN: It's not like we're hardened criminals here. We're in show business.
Posted by Luana Krause at 5:10 AM

I always thought Ralph Fiennes was so handsome until he played Voldemort. Now he's just creepy.

Marjorie: It's amazing what they can do with makeup.

What kind of character did Ralph Feinnes portray? I used to think he was rather wooden and sinister until I saw him in Maid in Manhattan. :O)

I never saw that movie--now shall have to do so. Ralph Fiennes is such a versatile actor--evil and sweet, altogether.

What fantastic movies you have chosen. I am enjoying reading all of your posts.
"Love Story" was my first grown-up movie.

haven't watched the movie...would love to, one of these days. :)

Thanks for reminding me about this movie. I have always wanted to watch it:)

I will happily watch anything with Ralph Fiennes, even if he is Voldemort. :) Quiz Show was a great movie!

Madelieine: Fiennes played Charles Van Doren, the contestant who fed all the answers on the quiz show. The public loved him and the quiz show producers wanted to keep him winning. He was a nice enough fellow but was caught up in the ruse and didn't know how to extricate himself.

Susan K: I agree. Fiennes is versatile. I think that's why he is so appealing. Kind of like Johnny Depp, who can take on any role and do it well.

Doreen: Thanks for reading. I'm glad you're enjoying this trip down "movie memory" lane. I'm having fun, too.

mymy: definitely one to put on the Must See List.

Siv: I wish I had time to watch the movies I've never seen...not enough time and too much to do.

Alison: Quiz Show is a great movie. I'm glad I could find a memorable movie for the letter Q.

This makes the second A-Z challenge blog I've seen doing the alphabet in movie titles that chose this film. No love for The Queen? Or more up my alley - Larry Cohen's Q? Regardless - a fine choice for a difficult letter - great performances across the board, solid period atmosphere, unobtrusive but effective direction from Redford - a total package for sure, heartily recommended and enjoyed here! Thanks for posting it! Cheers!

Craig: I was "this" close to choosing The Queen...I actually liked it better than Quiz Show, but my theme for the challenge was about movies that impacted my life and Quiz Show did that more than The Queen as it was the first Ralph Fiennes film after Schindler's List. SL is an absolutely mind blowing movie on every level; it touched me in a powerful way.

Haha, you weren't kidding! All I can say, is phenomenal choice!

Matthew: Thanks for stopping by! I really enjoy your movie blog. Loads of fun.