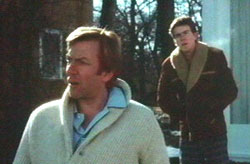 A to Z Blogging Challenge: Movie Memories
Blogging about the movies that made an impact on my life
Ordinary People (1980) ranks as one of my all-time favorite films.
It's the story of Conrad (Timothy Hutton), a teen whose older brother was killed in a boating accident. Conrad blames himself for what happened to his brother and attempts suicide. The movie begins when Conrad has come home from the mental hospital and tries to readjust to family life. His mother (Mary Tyler Moore) is cold and aloof toward Conrad, subconsciously blaming him, yet in denial that anything is wrong. His father (Donald Sutherland) tries to keep the peace and hold the family together. He feels badly for Conrad and does everything in his power to support and encourage him.﻿
Conrad's psychiatrist, Dr. Berger (Judd Hirsch), helps him overcome the guilt he feels about his brother, his mother's rejection and his father's obsessive concern.
I related to the father in this movie. Our family had a similar dynamic when our teen daughter had problems and was seeing a psychologist. I felt Hubby was too harsh with her and I was stuck in the middle, trying to keep the peace. It was a stressful time in our family.
One of the most powerful scenes is when the family is taking pictures at Christmas. The mother doesn't want a picture of her and Conrad together. It's such a sad moment because Conrad strongly senses her rejection.
In the end, the father realizes the truth about his wife and confronts her. Afterwards, he and Conrad have a conversation. In the past, the father was always trying to help Conrad by being "understanding" and "encouraging." But now the father has changed. For the first time he is honest about his feelings and tells Conrad the way things are. Ironically, that's really what Conrad needed all along.
DR. BERGER: Feelings are scary. And sometimes they're painful. And if you can't feel pain... you won't feel anything else either.

I agree Ordinary People is a very good movie. :)
If I only I could write like that...
*sigh*

I remember how haunting this movie was. The mother was so aloof and distant. I am sorry you had to experience a dynamic like this, in any facet. I hope things are better, now~

Lesley...The book was amazing...I've read it several times. Robert Redford did a brilliant job as director.

I've never seen this movie, but now I really want to.

Ella: Oh, yes. Things are better but life goes on...good and bad. Once one problem is solved, another pops up in its place. But it's all about enjoying our life even when "bad" things are happening.

Marjorie: I hope you watch it. It's a wonderful movie.

I saw the movie a long, long time ago. But I read the book pretty recently and absolutely loved it. Very heartbreaking--but good.

This movie was so moving. The subject of 'suicide' was always kept quiet when I was growing up. Whispered about in quiet rooms, but it was never brought up.
The golf scenes were shot in Apple Valley, CA, while we were raising our 3 small children in Victorville. I went over to the shoot site, and got autographs from Mary Tyler Moore, Donald Sutherland, and Robert Redford. I didn't know then how powerful the movie would be. thanks for a great posting.

Susan: Yes, the book was excellent. I very touching story.

Good movie, just posted about it somewhere. What ever happened to Mary Tyler Moore?

Susan K: How exciting for you to see a movie being made! You never know how a film is going to turn out. I remember the golf scene...it was the first time the mother and father actually dealt with their feelings toward each other.

I don't know if I've ever seen this movie in its entirety. I will need to get it from the library or see if I can catch it on TV sometime.

Siv: Good question. She was stunning in the Dick Van Dyke Show. Such a beautiful lady. It was surprising to see her in such a dramatic role.

Kris: Yes, this is one that belongs on the "must see" list.

great choice, its now in my 'must rewatch' category

I never saw this movie and it sounds so heartbreaking I'm not sure I want to. I've seen so many families who fall apart when a child is lost.

baygirl and Susan G: I have to be in a certain mood to watch this...it's pretty intense. Thanks for stopping by.

I'm not sure if I've seen this one. But I think I need to!

Alison: Great to see you! Thanks for stopping by.

The epitome of the family drama - as pitch perfect in performance and tone as it could possibly be. I managed to work with Mary Tyler Moore on a TV movie called Secrets from the Rose Garden - she was very professional and pleasant. I worked with Donald Sutherland on the sci-fi picture Virus - he was a little prickly but okay. I wish I could have added Timothy Hutton to my list - an underrated and magnetic actor - just like his father. It is hard to believe Ordinary People is now more than thirty years old! The truths in it make it pretty timeless. A lovely post - well done ma'am!

Craig: It's impressive that you've actually worked with these amazing actors. After this I became a fan of Hutton. I loved him in Taps...one of my all time faves. Even with the young Sean Penn and Tom Cruise, Hutton outshone them both.