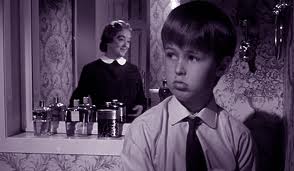 A to Z Blogging Challenge: Movie Memories
Blogging about the movies that made an impact on my life
I first saw The Nanny (1965) on TV and it scared me to death (no pun intended). The story is about a killer Nanny. Only young Joey, Nanny's charge, knows the truth. He had been blamed for his sister's death and sent to an institution for disturbed children.

The movie opens with Joey returning home. No one believed him when he told them it was the Nanny that murdered his sister. Naturally, he doesn't want to be alone with her. He won't eat the food she prepares (it might be poison) and he slides his dresser in front of the door so she can't sneak into his room in the middle of the night and suffocate him with a pillow.
I thought he was pretty brave for a little kid. What else could he do? The adults wouldn't help him. He was on his own. Boy against Nanny.
Watch at your own risk.﻿
Posted by Luana Krause at 5:25 AM

This sounds very familiar to me, but was out a few years before I was born. But can you imagine - a killer nanny? Ack...no wonder nanny-cams came into being!

Kris: A killer nanny...what an awesome combination for a horror story.

This sounds great! Now, to see if I can find it anywhere....

I've never seen this film but I want to now!

Loved this post and glad to have met you through A to Z.

Notes Along the Way with Mary Montague Sikes said...

Didn't know about this film. When I think of The Nanny, I think about the TV series out now.

Thanks for commenting on my blog. Nice to meet you on A to Z!

Lisa, Ellie, Monti: Thanks for visiting. The Nanny TV show was a whole other animal. Although Fran Drescher is a litte bit scary. LOL

Yikes. It's going to give me nightmares.

Massachusetts had a case some years ago where a nanny shook a baby to death. Her trial was big news.

Thanks for visiting me.

Hi, Bob: Real life horror stories freak me out...I can only handle fiction. Movies like this aren't for everyone. But Bette Davis is amazing.

Interesting movie concept. I never heard of this one. Was Joan Crawford in it? Does the kid survive? My appetite whetted by your post, I'll see if I can find it because you provoked interest in it. Good job.

Super creepy lady. That movie was kind of before its time.

Scary! I found the movie gaslight pretty creepy too. Then again I don't watch many creepy flicks.

One I haven't heard of.

Anthony: No, Joan Crawford wasn't in it, but it was still creepy. If you watch it, let me know what you think.

Susan: Even now when I hear someone filling up a bathtub with water it creeps me out. "Bath time, Joey!"

Marjorie: I remember Gaslight. I didn't see it until a friend at work told us that she thought her husband was gaslighting her. I found out the term came from the movie, then I absolutely had to see it.

Hi, Siv: It's pretty obscure. I just happened across it watching an old movie channel.

ooh sounds chilling! I will have to add to our list. I love old movies. Great blog! :) I love movies.

Heather: Thanks for stopping by!

Terrific latter day Davis - thank goodness for Robert Aldrich and Whatever Happened to Baby Jane - letting the older ladies tear it up in thrillers all through the 60's! Splendid choice - and not the obvious! Kudos!

Craig: I loved Whatever Happened to Baby Jane! Davis and Crawford at their best. The dead parakeet on the dinner tray was INSANE!