V is for Vanessa Huxtable 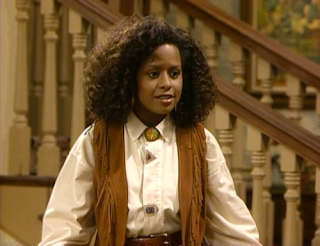 Welcome to the A to Z Blogging Challenge where I will post on a word
featuring a different letter of the alphabet each day of the month of April.
My theme for this challenge is Female TV Characters.

THE STORY: Cliff and Clair Huxtable live in Brooklyn, New York, with their five children -Sondra, Denise, Theo, Vanessa and Rudy. Cliff is an obstetrician and Clair is a lawyer. They are the perfect parents -  even better than Mike and Carol Brady. They rule the roost with love, discipline and humor. Who wouldn't want Bill Cosby as their father? Bedtime story = Chicken Heart.

UP CLOSE AND PERSONAL: Vanessa is the quintessential "middle" child and had to find her own way to distinguish herself from her siblings. Thus she excelled in school and became a star student..A brainiac, she graduated from high school early and went to college before her peers. Vanessa is a smart cookie!  But she can be sneaky and tends to stick her nose where it doesn't belong. Her knowledge of brother Theo's shenanigans gives her the upper hand.


Are you a middle child?
Posted by Luana Krause at 5:00 AM

Nice post! I haven't watched the Cosby Show in a while, but I have sweet memories of it. And no, I'm not a middle, I'm an only - according to my mom that means I get to play all the roles - older, middle and younger - all at once . . .

I loved the Cosby Show, but I probably liked the Brady Bunch more because they were always doing fun stuff!
I'm the youngest of five, but my sibling are way older than me, so I was more like an only child.

Tyrean: Some of my best friends are "onlys." Which have many of the same characteristics as first-borns.

deathwriter: I loved the Brady Bunch. I was the same age Marcia. I also had a crush on Peter! I am a first-born. I have a brother two years younger. We were pretty close growing up because we moved a lot.

I'm a middle child, but since my brother is 13 years older and was graduating from high school when I went to kindergarten, I've always felt like the oldest.

I loved the Cosby Show! It made me smile to see Vanessa's picture. Thanks!

Dana: The Cosby Show was so funny. Bill Cosby was/is the perfect Dad!

Joy: Vanessa was always my favorite of the kids. I think we would have been best friends.

You have done a great job on the A to Z Challenge...
Jeremy [Retro-Zombie]
A to Z Co-Host
My New Book:
Retro-Zombie: Art and Words

Retro-Zombie: Thanks for stopping by! Cool name, btw.

I was a big Cosby Show fan - but I was not a big Vanessa fan - as she was a little snooty. But she's still a solid pick - so cheers!